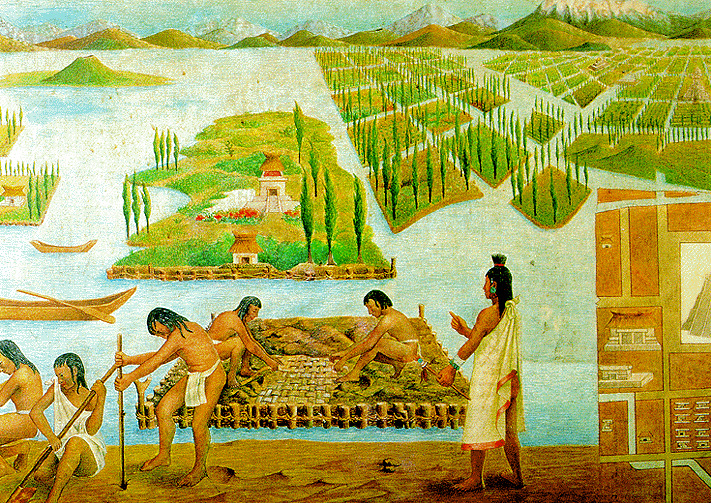 Becoming more popular everyday, the home Aquaponics system which uses the same farming techniques as both the ancient Aztecs and the people of East Asia. This farming technique is generally believed to have originated in the early Asian and South American civilizations. The Aztecs would create islands on lakes and in canals on which cultivated food plants, using the nutrients derived from the mud and waste materials. The ancient Chinese integrated aquaculture into their farming by raising fish in the rice paddies, and on into the 20th century you will find prominent pioneers who are credited with the “modernization” of the home Aquaponics system as it is today being especially favorable to organic growers or living the sustainable lifestyle.

Although easy in the long term of things, there is still a lot to learn before you begin by either purchasing a system or moving ahead and building one yourself. It is recommended that you get familiar with the technology and how it all works. It’s also recommended to you start small and get to know the techniques first hand while you work out the little kinks before you spend money on a larger system. Mistakes on a small scale are much less costly at this stage while the same mistakes done on a large scale could be catastrophic and very expensive indeed. Also keep in mind that if you build a DIY System you’ll save thousands over purchasing a pre-built kit. Aquaponics can work for anyone on any scale, you can upgrade to whatever scale you like simply by multiplying the number of systems and increasing the number of grow beds.

Building a home Aquaponics system is relatively simple and only requires basic tools such as a drill, pvc pipe cutter or saw, and a utility knife. The basic system consists of only 3 major components. The grow bed, fish tank, and water circulation system. The best fish tank to use is usually tall such as a stock tank with an opaque surface to block out the sun. This is to protect, as too much sunlight with create algae which is harmful to the fish. Some people are creating systems using IBC tanks or water barrels, but they should be painted on the outside to minimize sunlight. Rubbermaid stock tanks have their benefits for their durability. 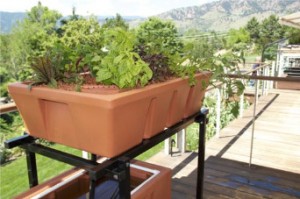 Over $1000 for this small system from a retail outlet

The grow bed can be plastic or built out of wood with a plastic liner. Some people again are using water barrels, however they tend to be flimsy and need to be propped up on some form of framework due to the round structure. IBC totes are also used, but you need the tote’s framework to keep it’s structure. The water circulation system consists of a water pump strong enough to circulate water upward on to the grow bed where it is, and then gravity fed back into the tank. There are also valves that are needed to regulate the flow rate into the grow beds. The water is constantly being circulated unless it is on a timer so the pump is always on.

Some people build their water pipe system using PVC, but vinyl tubing can be used, which is very flexible and easy to work with especially when moving components around or adding any additional grow beds. There are some additional components that can also be added to make it more elaborate such as additional grow tubes or towers and water tanks. The 3 major components though are all that is necessary. The last thing to consider which is needed, is a 10′ by 10’ft space with a water source close by and adequate sunlight. Just about every plant which you can grow in the garden can work on a home Aquaponics system, but keep in mind that leafy green vegetables can grow well with their roots in the water while most other plants require a space for oxygen at the root level.

The maintenance on the home Aquaponics system requires keeping the tank full at all times, and checking the chemical composition of the water. The pH level of the water needs to be kept between 6.8 and 7.2 which is also very close to neutral. This will not only allow the plants to absorb the necessary nutrients, but it will also allow for nitrification. If the pH level is too high, the plants will become sick and eventually die. Keeping the plants healthy will naturally ward off any unwanted insects or fungal diseases.

To test the water, you will need a water chemical testing kit, which can be purchased at any pet store that sells fish. You will need to test for pH, nitrates, and ammonia. These chemicals need to be regulated by maintaining the nitrogen cycle, the amount of fish you have in your tank, and the number of plants in your grow bed. The pH level can be regulated, by safely adding acidic or base compounds at very small amounts to avoid shocking the fish.

The ratio of plants to fish, is very roughly 4 plants to 1 lb. of fish, but this depends greatly on how big the fish are and what type of fish or the type of plants you are growing. The amount of water required for the system is 1 gallon, per pound of fish and a ratio of 1/1 for the amount of water in your grow beds to the fish tank.

The Types Of Aquaponics Systems 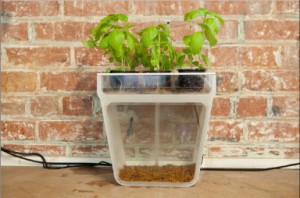 Example of small you can create a system

This type of system is as small and simple as it gets. The kit basically consists of a small fishbowl or you can use a standard aquarium style tank. The same care taken with an aquarium must also be observed in any Aquaponics system. The fish still require oxygenated air, fish food, and a stable environment where the pH level and water temperatures can remain the same. Plants can be placed right above the tank where the roots can then hang in the water, usually in small pots with grow media, and not soil from out of the garden. Although plants do need adequate sunlight, avoid placing the tank directly in the sun where the water temperatures can fluctuate throughout the day. Drastic changes in the water temperature can shock the fish causing stress, sickness and death. 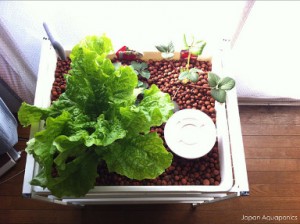 Indoor systems can be on a larger scale than counter-top systems or those smaller outdoor systems which have been adapted for indoor use. The advantage of having an indoor system is climate control and all year round plant growth. It also eliminates the need for pest control, however even in a perfect environment pollination can be difficult for many fruit bearing plants. Indoor decorative plants can also do well, and brighten up any space. Some other issues with having indoor systems, is making sure that the plants get enough light during the day, and the style of maintenance required is also the same as outdoor systems. Using a hose inside to fill the tank can at times be a messy chore, and the pump noise could become annoying if close to sleeping quarters, although is very much depending on the size you use. Many people have created indoor hydroponic systems using solar power with artificial lighting, timers for the flood and drain systems. These technologies and techniques can also be adapted for use in home Aquaponics systems as well. 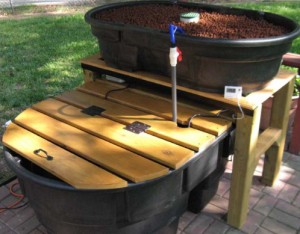 Backyard systems are very much the most popular type for those wanting home food production. People who are already experienced with gardening, will find the transition over to a home Aquaponics system a very easy process. These systems can be placed in the corner of the backyard, on a balcony, the deck or up against the back of the house. Wherever you choose to put your system it is a good idea to place it near a tap or water spigot for easy water changes and general maintenance such as the cleaning of filters and such. Backyard systems offer the ability to “upgrade” and to add components for increased food production or output. There’s also more room to experiment as those who have mastered the home Aquaponics systems often do. To learn how to build one of your own backyard systems designed for home food production, get the DIY Aquaponics.